Here at Parco Fluviale Novella you will have the opportunity to walk along hanging metal gangways and let yourself be conducted by the emotions that only a place this mysterious can give you.

The core thread running along the entire route is water, which plays a key role both for nature and for man.
The continuous erosive action of water on the rock is responsible for the morphological birth of this particular place. A typical fluvial valley with the unmistakeable V profile has been formed. It begins life with emerging scaglia rossa rock being easily eroded and ends in a spectacular canyon with narrow passages and vertical faces carved into more resistant dolomia rocks. 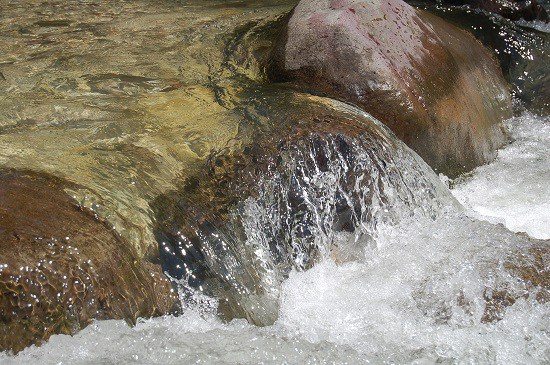 Inside Parco Fluviale Novella you mainly find sedimentary rocks, but when you walk down the Novella river’s gravel bed it is not at all rare to find porphyry pebbles (effusive volcanic rocks) and Phyllites (metamorphic rocks).

Starting from Mulini di Cloz the path can be divided into two different legs: the V shaped valley and then the gorge. 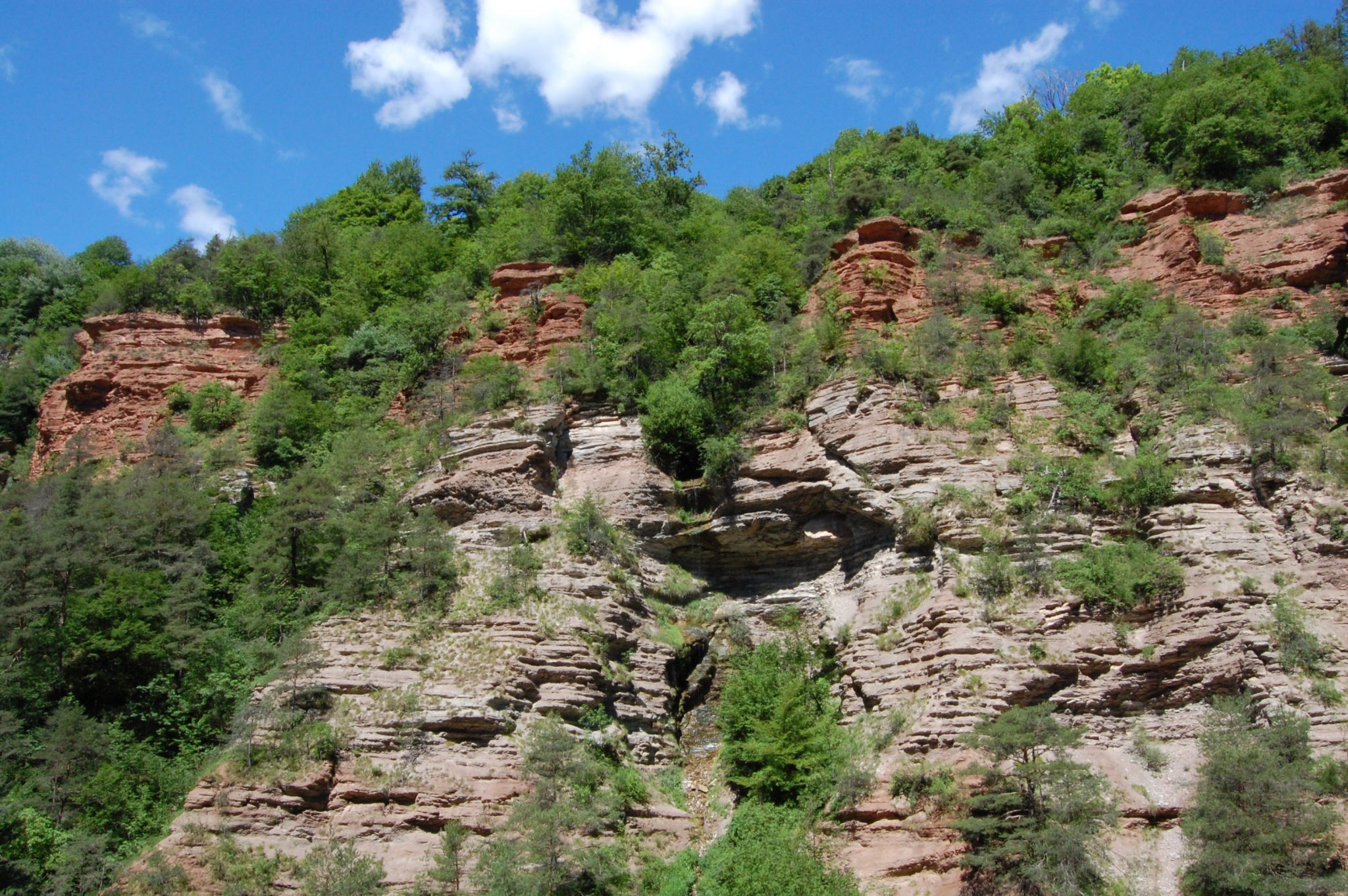 The V shaped valley is characterised by the so-called scaglia (dating back 100 million years) which is partially red and partially grey: this is due to the different concentration of oxygen levels in the seawater during the time of its formation (this area was in fact submerged during the Tethys era). A higher level of oxygen is associated to the scaglia rossa, less oxygen to the grey scaglia.

The gorge, however, presents much tighter passages than the V shaped valley, and is characterised by the presence of dolomia. This kind of rock has a more ancient origin when compared to scaglia. In fact it dates back 200 million years. The dolomia’s erosion that resulted in the gorge’s formation was caused by the activity of subglacial rivers at the time of the last ice age and by the more recent impetuous of the Novella river’s flow. 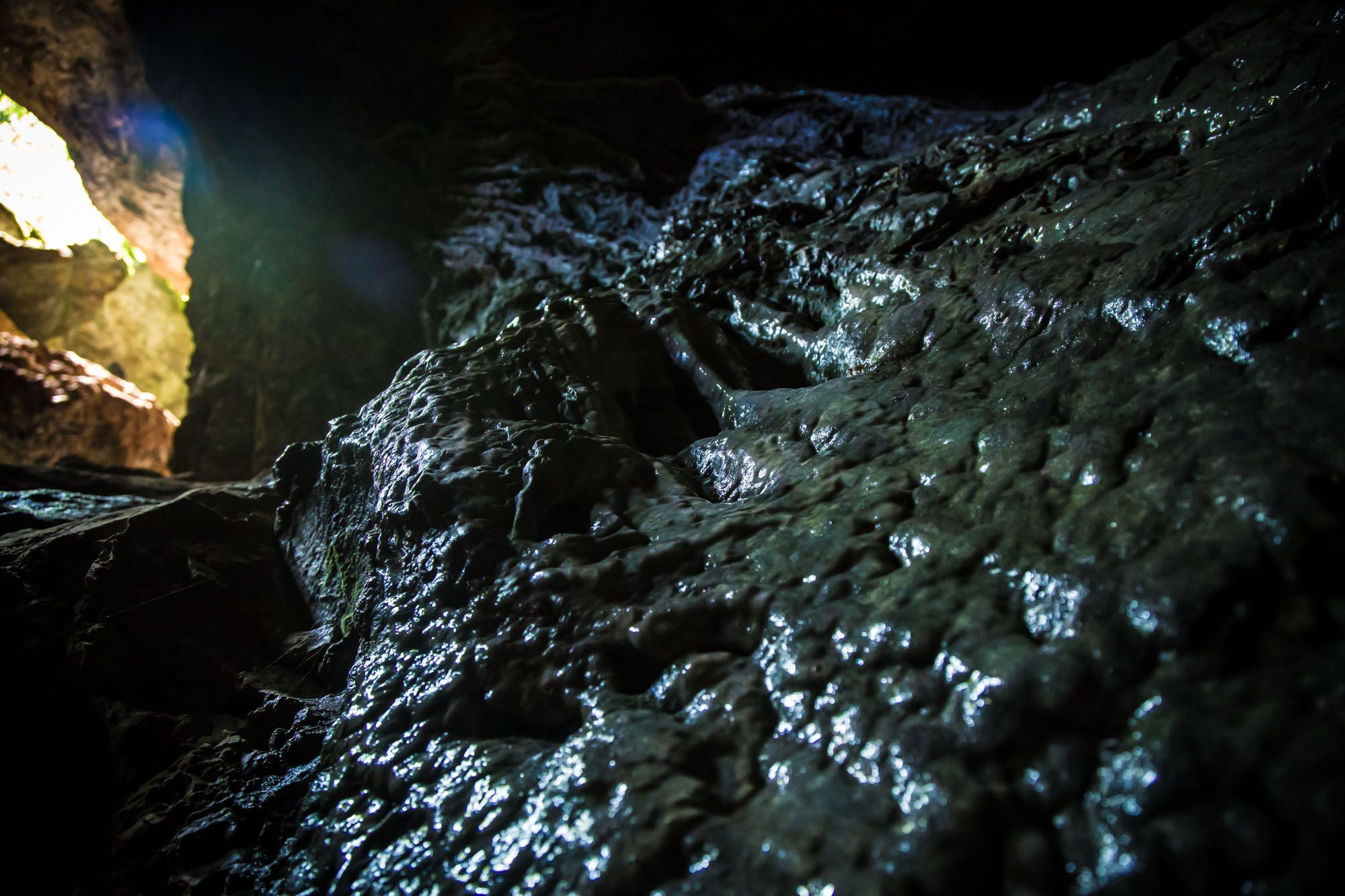 If on one hand the fauna is not a good enough reason for some to visit the Park with its vegetation and flora representing a striking seasonally changing beauty, then, perhaps, they will be moved by the sighting of a deer or of a buzzard.
The habitat’s beauty urges us to understand the absolute necessity to protect it, both to allow the future generations to see and enjoy it, as well as because it is the perfect environment for its fauna.

Although it does not profess to having any particularly rare botanical species, Parco Fluviale Novella’s flora is still rich in variety, being characterised by many different species thanks to the different pedoclimatic microenvironments that are typical there.
In fact, the environment passes from extremely dry and light to dark and humid inside the gorges.
Along the 3 km of designated trail that runs between hills, gorges and steep mountain walls that loom over the Novella River, you have the opportunity to see approximately 200 different species of plants. 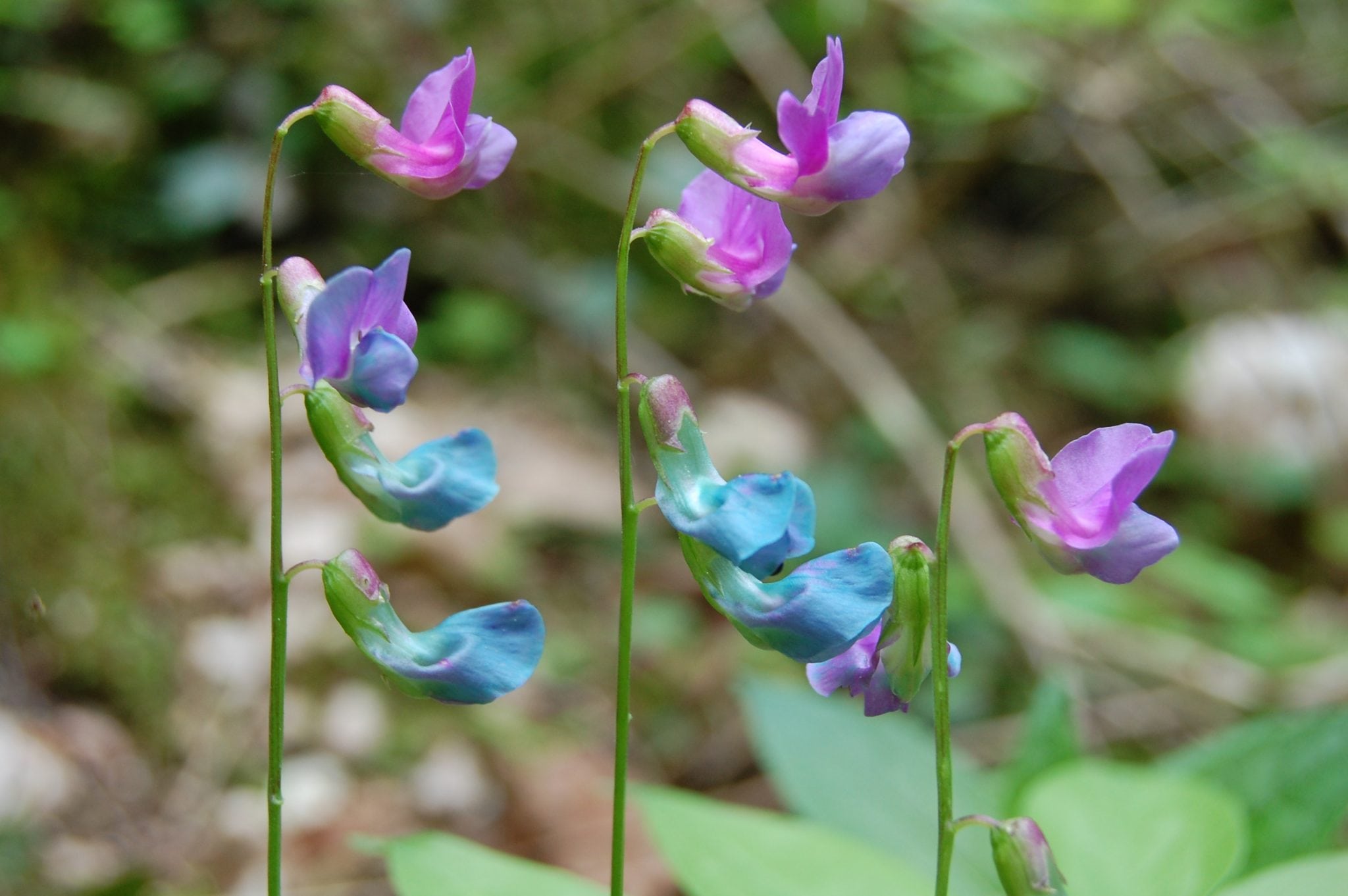 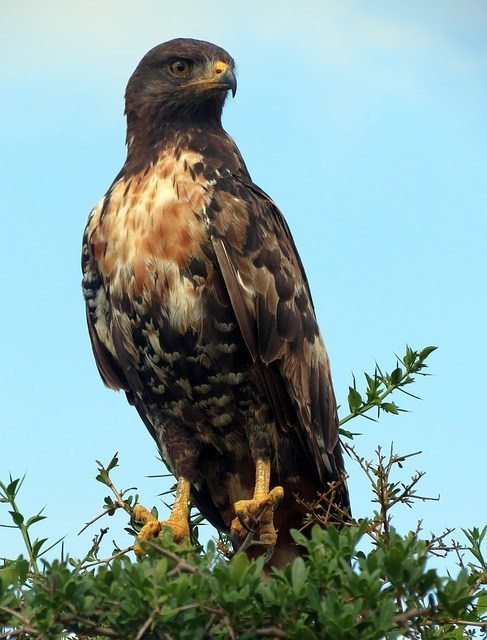 Along the Parco Fluviale Novella’s trail you can look for the traces of the bond between man and nature. The structures found in the territory witness man’s capacity to find over time a way of living in unison with nature, developing a deep respect for it and following its rhythm.

The mills in Cloz

At the start of the trail located in the village of Cloz you come across two mills. Their presence on the bank of the river was first documented in 1375, but they have been abandoned for some years now. The mills harnessed the water flow from the Novella River in order to grind wheat and produce flour. They are proof of the exploitation of the river’s waters for man’s subsistence without the need to modify its natural course. 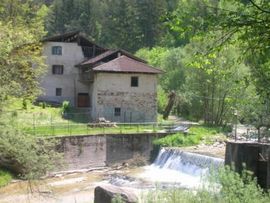 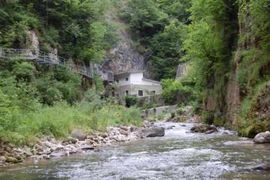 Primo esempio di sfruttamento dell’energia idroelettica in Valle di Non, la centrale di Pozzena è operativa già a partire dal 1902 ed è ancora oggi funzionante! Its construction started in 1900 with the creation of a 1km long tunnel inside the rock, dug completely by hand to re-route the waters from the mills in Cloz to the plant. At the end of the tunnels the water is pooled into a small collecting tank from which it is then sent to the turbine through a penstock (sluice) of about 60m.

As you progress along the Novella River, starting at Monte Luco, near Passo Palade, many bridges allow you to cross the very narrow and deep gorge.

It was May 25th 1276 when at Ponte Alto Meinhard, Count of Tirol and Henry, Bishop Prince of Trento met to try and find an agreement that could grant peace between the two bitter enemies. It is now recounted that the bridge in question was the one in Pozzena, one of the three ancient bridges that allowed the crossing of the Noce and Novella rivers.

A couple of hundred metres South-East of the Pozzena bridge there is another bridge, which the locals call “pònt da Marsìli” or *pònt da le lame”, another stone bridge on whose keystone is visible the date 1854 (or 1856 ). The bridge is characterised by the presence of a wide hole at its centre, which has made it impassable.
San Biagio’s hermitage stands on a massive spur of rock that emerges from the ravines of the Novella River. It consists in a number of buildings, the oldest of which dates back to the XIII century. Finally, even further down the valley, river Novella is crossed by “pònt da la poìna”, which stands surrounded by woods between Romallo and Banco crowning the exit from the first of the four canyons that make up Parco Fluviale Novella. 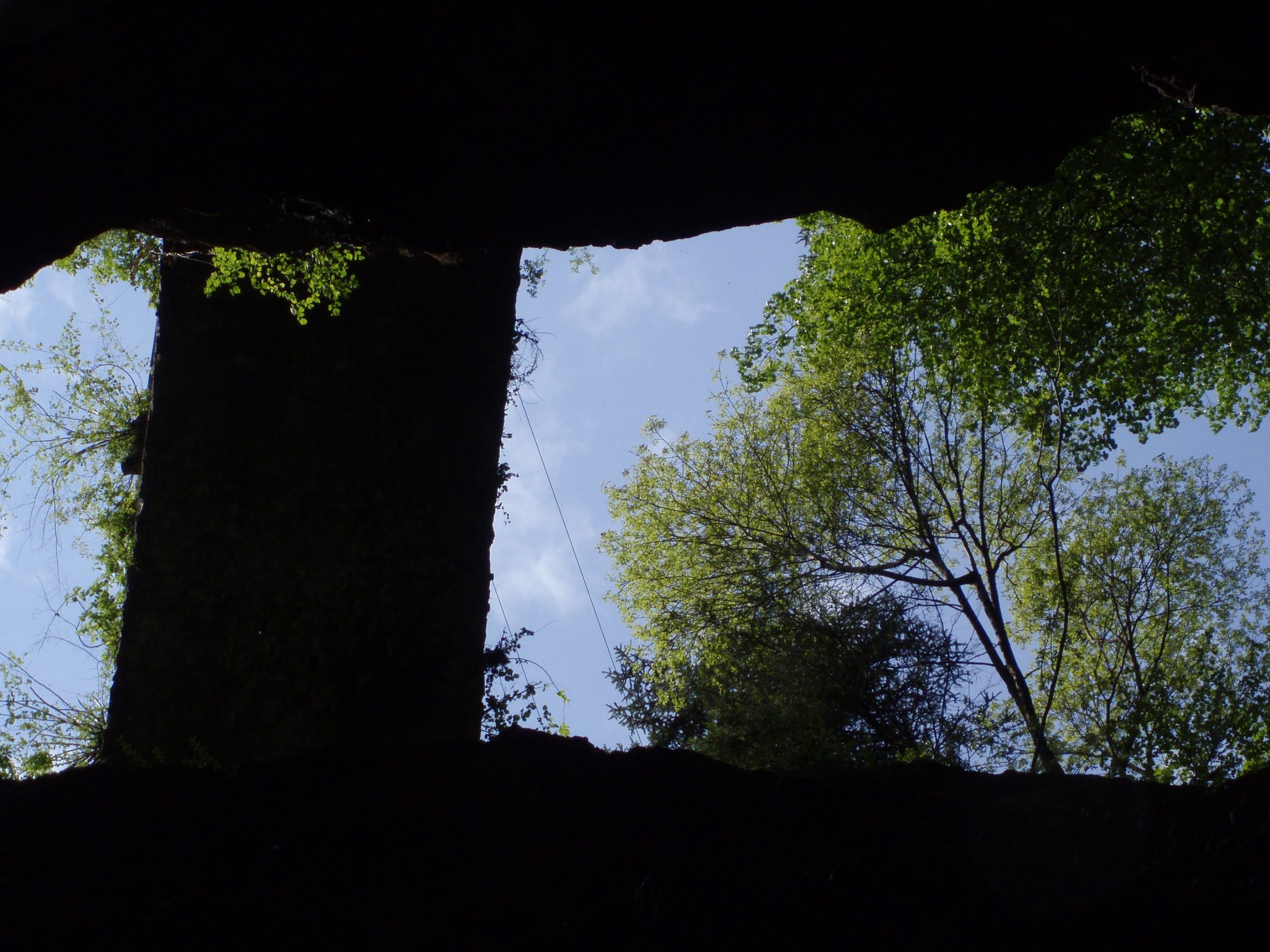 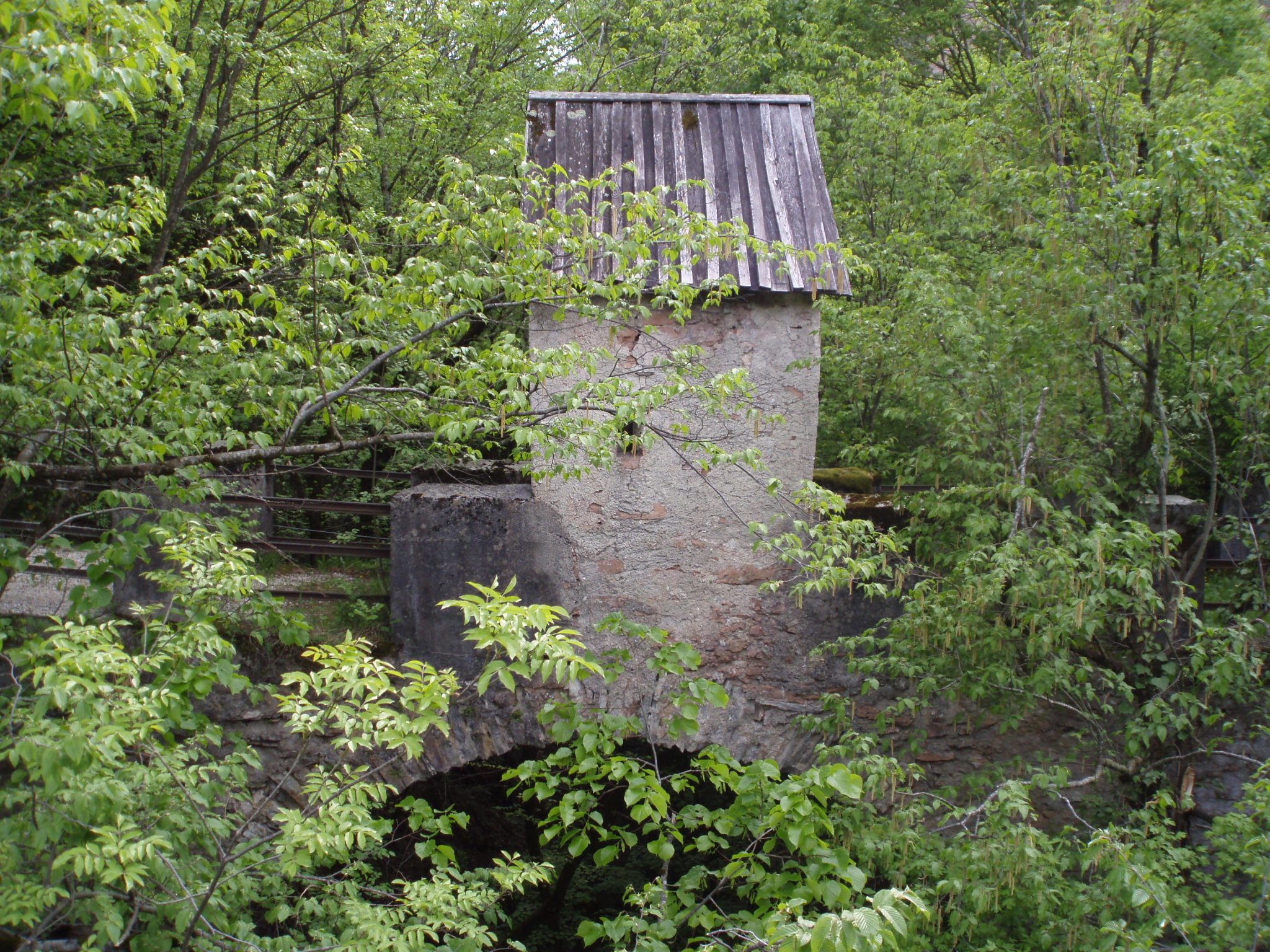 The Calcara is a dry stone built furnace used for the production of lime, once a very common activity in those areas where wood and calcareous rocks were common. The structure was usually located in a wood or adjacent to one, on ground easy to work with, where there was a good presence of stones and rocks containing calcium carbonate, the most important raw material required to obtain the end product. To realise the structure, first a circular hole was dug, which was then lined with heat resistant rocks like granite, porphyry, or erratic, in the shape of a truncated cone with a lateral opening through which to feed the fire and clean out the ashes. 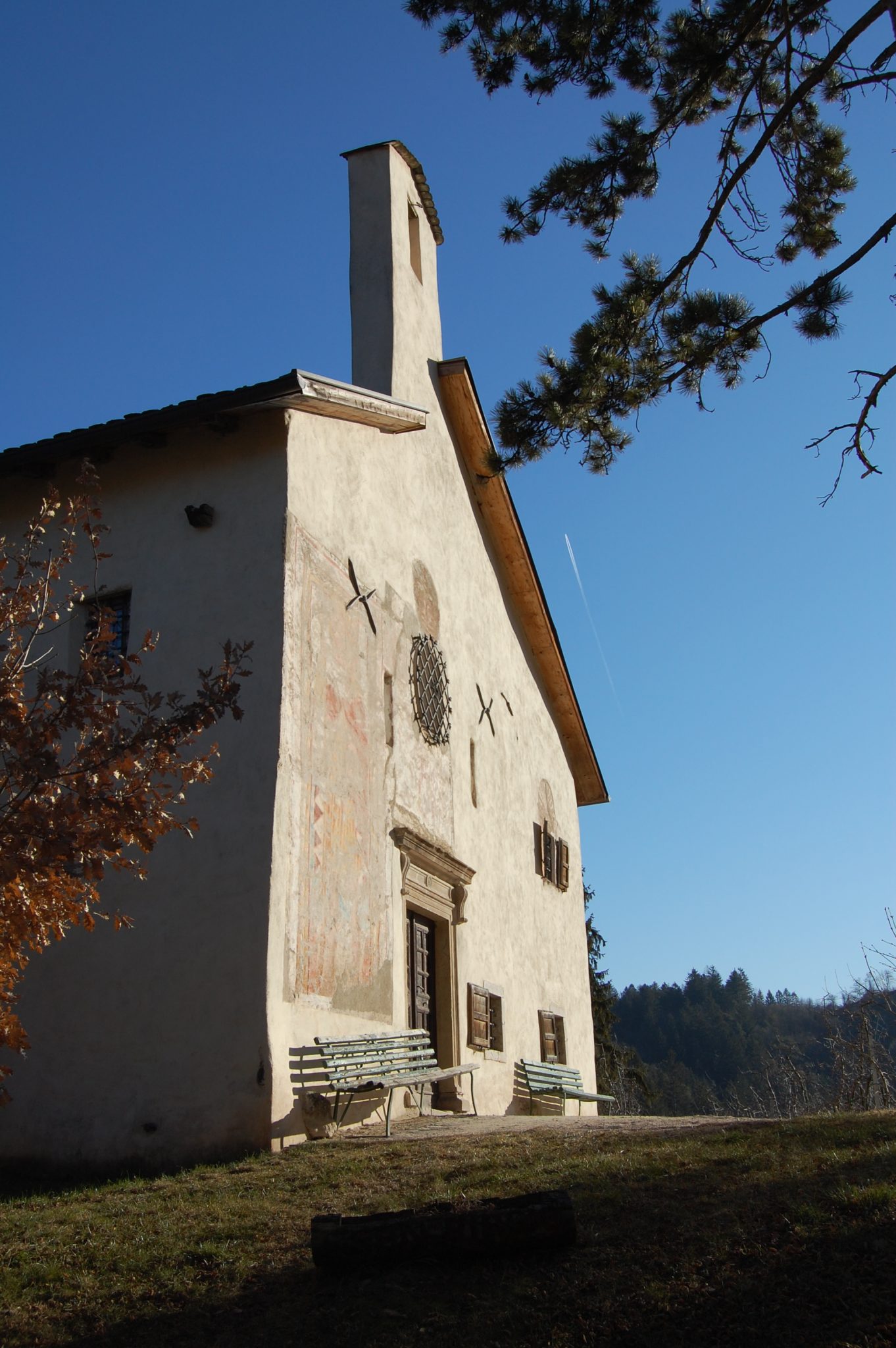 San Biagio’s hermitage stands on a massive spur of rock that emerges from the ravines of the Novella River. It consists in a number of buildings, the oldest of which dates back to the XIII century.

The most antique among them is a Romanic chapel dedicated to the Holy Virgin Mary, with vaults supported by six small monolithic pillars. The chapel hides a polychromatic wood statue of the Holy Mother with Child, a late Gothic artifact carved by a German artist.

The main chapel, standing just next to it, is dedicated to San Biagio and is characterised by the typical shape of the XV century: it’s two chapels are perfectly oriented and interconnected. The hermitage is located on the southern side of the hill: the first documented news of its existence is on a parchment dated 1307. In the oldest documents the site is also called “San Lazzaro’s hill”, a fact that seems to support the theory that once you may have found a leper hospital there. Over the course of many centuries, numerous hermits inhabited the area. Under the altar table in the main chapel of San Biagio you can see a funerary memorial stone in red limestone dating back to the Roman Empire.

The fruit of sin

The apple is the symbol of Val di Non. It is cultivated across a surface area of 6,400 hectares and so even entering the park you may come across various apple orchards.

The D.O.P. apples (protected designation of origin) are only produced in a limited area found North-West of the province of Trento. They are located at an altitude between 450 and 900m, characterised, by a particular climate and soil type, making it one of the best locations in the world for the production of apples. This is another reason why in Val di Non the tradition of apple growing has been documented for over 2000 years.

The apple varieties that are cultivated here are mainly the Golden Delicious, the Red Delicious and the precious Reinette of Canada, but there are also orchards of the more “modern” varieties, like the Fuji or the Royal Gala 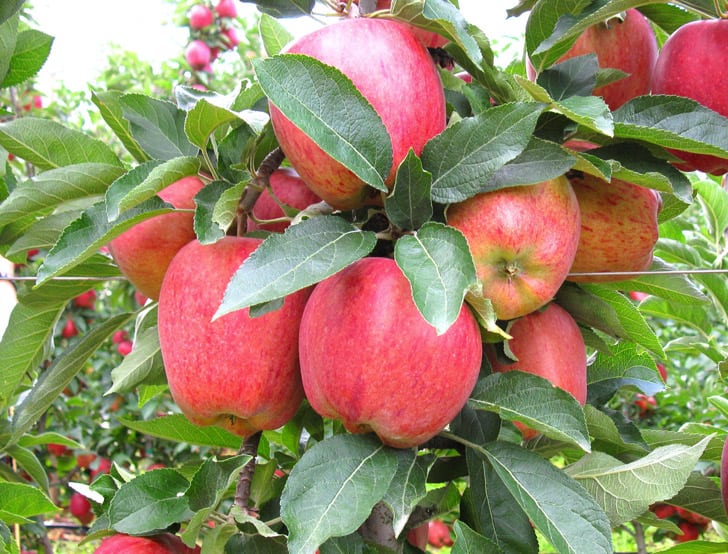 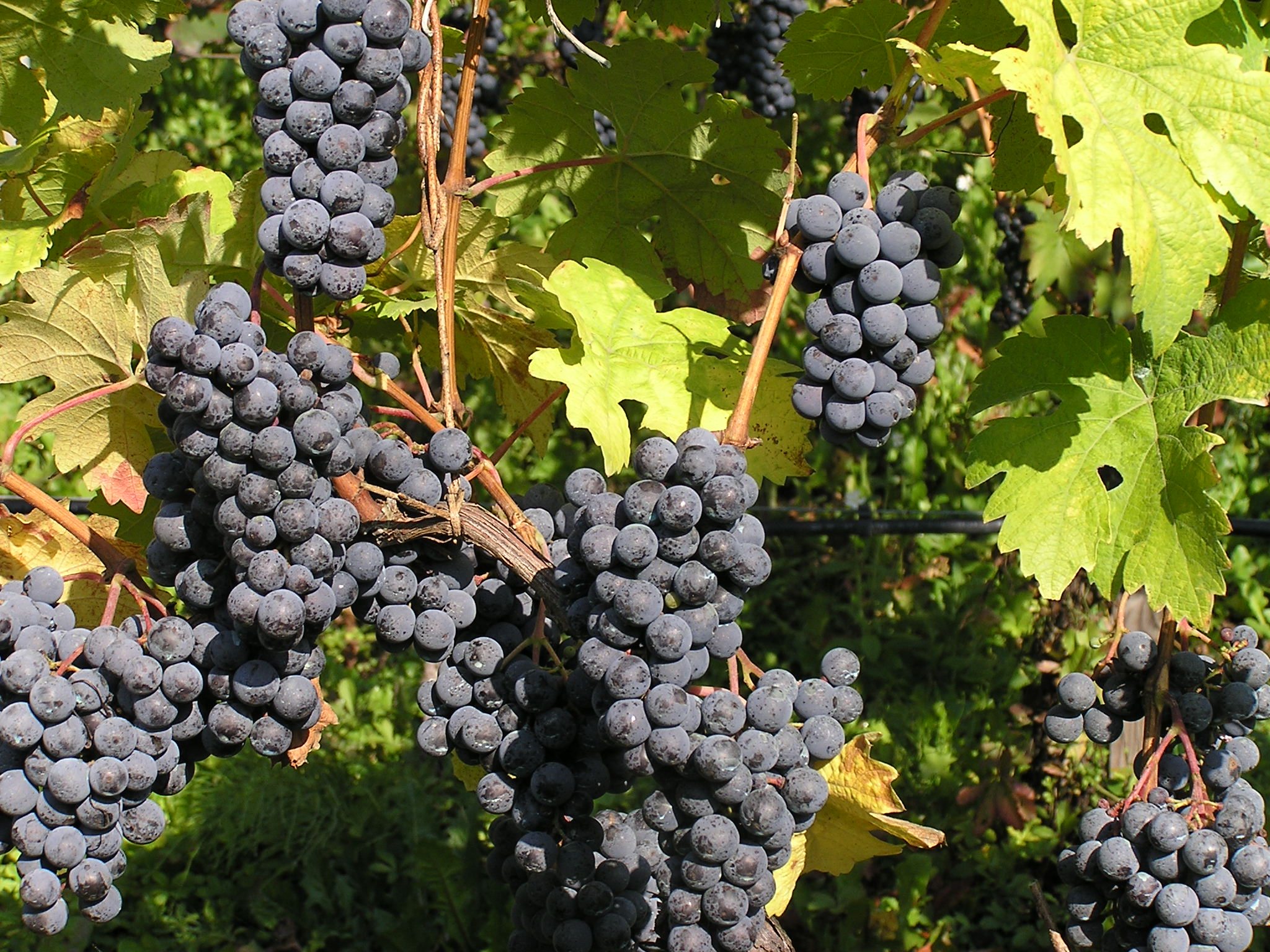 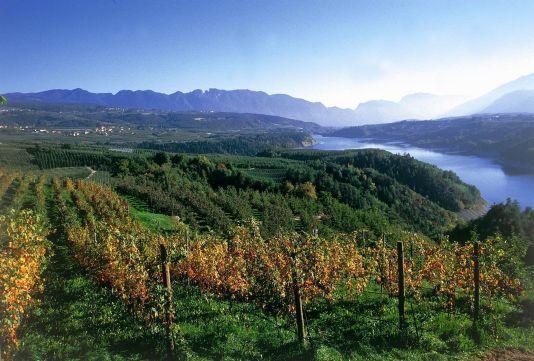